Have you lately been considering a combo device that is both affordable and jack of all trades? Yes, I am talking about the Motorola MT7711 24×8 cable modem router that even lets you enjoy VoIP services. All that sounds exciting enough, at least on paper, but does it live up to the expectations? Let’s find out through the Motorola MT7711 review.

Motorola MT7711 modem router isn’t a pushover, courtesy of slightly older wireless standards and affordable price. Instead, it is one of the more balanced DOCSIS 3.0 modems with a phone jack that caters to the traditional homes and office setups. And most importantly, it manages to strike the perfect balance between speed, coverage, and utility. What could be better!

Keeping the need for detailed analysis in mind, I have thoroughly tested the gateway in terms of speed, Wi-Fi range, ease of setup, and other important metrics. But before I begin with the MT7711 review, let us quickly jump right into the nitty-gritty of the Motorola MT7711 specs listed below. 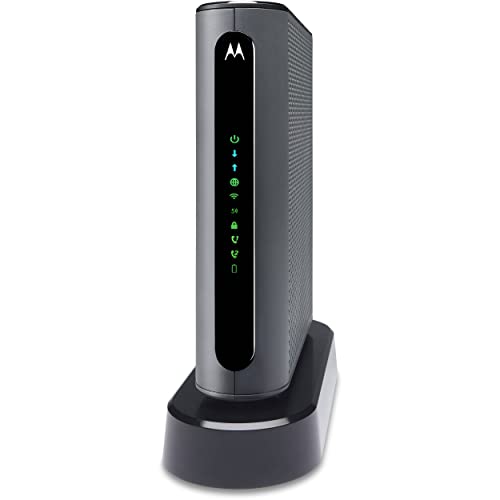 As a Motorola dual-band AC1900 router and Docsis 3.0 modem with phone, the MT7711 combo device does paint a pretty picture. Keeping every functional aspect of the gateway device in mind, I used it as my primary modem-router setup for at least two weeks and reserved my findings for the MT7711 review.

And to make things interesting, I tested it with Xfinity’s Select pack, with speeds going all the way up to 900Mbps. Here are my findings and strategies for maximizing the potential of this Motorola MT7711 24×8 cable modem router:

The MT7711 modem features slightly older DOCSIS 3.0 networking technology (differences between Docsis 3.0 and 3.1), led by 24 x 8 bonded channels. As far as the theoretical speed limit is concerned, this is one of the few Gigabit modems that claims to manage 1Gbps connections.

However, in real-time, I would recommend you pair ISP plans offering up to 600Mbps for getting your money’s worth.

While it is still a good enough modem, it excels as a wireless router featuring dual-band Wireless AC standards. As far as Motorola MT7711 speed is concerned, you get 1900Mbps of cumulative throughput across bands, which translates to 600Mbps of the far band, i.e., 2.4GHz, and 1300Mbps of the near band, i.e., 5GHz.

Other router-specific traits include Smart QoS functionality for traffic prioritization, full-band digital tuning capabilities for improved efficiency, and 3 x 3 MIMO compatibility to help you connect multiple devices at once.

On top of that, this is one of the few modem-router combo setups to offer an excellent WiFi range of over 2000 Sq Ft. And all thanks to the MIMO compatibility, the MT7711 can easily get connected to 10 to 15 smart devices with ease.

This Motorola cable modem is designed to work best with the Comcast Xfinity. Apart from Xfinity, some users were successful in pairing it with Spectrum and Optimum as well. Despite the limited ISP compatibility, you can expect the device to work with a wide range of internet plans, namely the Standard 300Mbps one, Select 900Mbps, or even the Gig internet plan, for that matter.

But then, the inability of the Motorola model MT7711 to work with the likes of Cox and Mediacom does take away a few brownie points and stops it from reaching perfection.

The MT7711 modem assumes a vertical structure with greyish and blackish undertones when it comes to aesthetics. Made of hardened plastic, the modem-router combo hardly overheats, with even the numerous heat dissipating vents to assist further.

The front part of the Motorola 24×8 cable modem is replete with ten indicative lights and a roundish exterior. In the rear, most standard ports exist, boasting four high-speed Gig ethernet ports. Coming to the dimensions, this networking device measures 2.25 x 8.25 x 9 inches. Also, the MT7711 weighs a manageable 1.80 pounds.

Coming back to the ports, there are two RJ-11 compatible ports in the rear, capable of working with any Voice-Over-IP-powered internet package from Xfinity. In addition to that, the internal setup is bolstered by three dual antennas, wireless amplifiers, and the elusive Beamforming technology to maximize the Motorola MT7711 WiFi range.

Even though Motorola hasn’t explicitly mentioned the processor type in the MT7711 modem, a multi-core Broadcom chipset cannot be discounted. Plus, there is 256MB of RAM, followed by 128MB of NAND storage space to help you keep the firmware details handy.

Coming to the performance, you can expect it to be a great 1080p streaming device, buoyed by the excellent hardware setup. However, the 4K gaming performance might not be as smooth unless you plan on connecting the gaming consoles to the wired Ethernet ports.

Motorola MT7711 setup is arguably the easiest, courtesy of an interactive web UI and the responsive and easy-to-follow Quick Start Guide.

As a Docsis 3.0 cable modem and wireless router with telephony adapter, you might find it overwhelming. But the ability to set shop in a few clicks, followed by the ability to set up a security password, is something that sets this device apart from the rest of the budget modem/router combos like Motorola MG7550.

On top of that, the Motorola AC1900 24×8 combo device comes with a slew of security enhancements, including hardware-specific lightning protection and software-relevant attack protection, Port filtering, VPN passthrough, and DNS notifying support.

Now that you are aware of good and not-so-good things about this motorola cable modem with VoIP support, it is time to go over the entire specs sheet in terms of hits and misses:

What is the WiFi range of Motorola MT7711?

As per the ratings and my personal conclusions, the Motorola MT7711 WiFi range extends through the 2000 square feet mark.

Is Motorola MT7711 compatible with Xfinity?

Yes, Motorola MT7711 is guaranteed to work with Comcast Xfinity, including their Voice plans. And despite the limited ISP compatibility, some users were also able to install and use it with two other popular ISPs, i.e., Spectrum and Optimum.

Motorola router-modem combos are extremely powerful and efficient, barring a few models that lose out due to the lack of support for a dedicated application.

How do I activate Motorola MT7711?

You can activate the Motorola telephony modem by simply connecting it to the computer via the Ethernet jack and working on the quick start module that comes pre-built. Once you open the web interface and feed in the IP address and other details, you are good to get started.

If you have a standard (mid-range) internet plan from Xfinity powering your humble abode, you might want to ditch the ISP-rented gateway device for the Motorola MT7711. The dedicated telephone ports make it a holistic networking device capable of catering to the office and homeowners alike.

Net-net, the Motorola MT7711 is quite a dependable modem/router combo that is also one of the few pieces to justify its price tag.

Motorola MT7711 is a Docsis 3.0 cable modem and wireless router with a telephony adapter built-in. It’s compatible with Comcast Xfinity and can support plans of up to 1Gbps. The cable modem has 24 x 8 channel bonding and four Gig ethernet slots, followed by two telephone ports for VoIP services.

The built-in router is capable of 1900Mbps and runs on Wi-Fi 5 standard. It can smoothly handle over 15 devices in a 2000 sq ft large area. Overall, if you want to replace the Xfinity-provided gateway device, this is an excellent option at a reasonable price.

Find my overall ratings below: