Netgear, without a hint of doubt, sets the highest possible standards when modem technologies are concerned. And while most of Netgear’s networking devices are show-stoppers, the CM1000 goes one step further by being one of the future-proof Gigabit cable modems.

But that’s not all there is about the CM1000. Instead, it is one of the few affordable top-shelf products that focus on aesthetics and performance. And if you work out of an office or planning to buy yourself an advanced work-from-home setup, well, the CM1000 is the option to pick.

Still, I wouldn’t advise you to take my word for it. Instead, you can read on to know more about this exceptional modem. I shall now enlist the Netgear CM100 specs before reviewing it in detail. 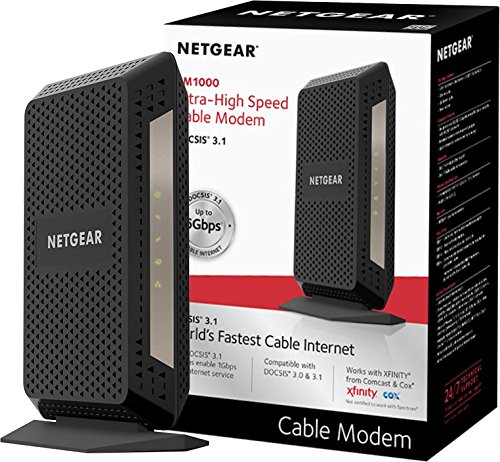 The CM1000 is a premium Netgear gigabit modem, period. Stacked with the best networking technology and ultra-fast ports, this modem outpaces any competition around. And that is exactly what I shall validate in the subsequent sections.

Also, just so you know, I tested the Netgear CM1000 as my primary modem for over three weeks, using it with a TP-Link router and even as a standalone device at times.

The CM1000 assumes a vertical form factor with dimensions fixed at 8.8 x 3.5 x 5.9 inches. Also, it is one of the few perfectly-ventilated modems in the retail space, and that too with a basal stand in place. It weighs less than a pound and involves hardened plastic as the underlining structural material. Plus, there are 5 LEDs in play for indicating network conditions.

Netgear made sure that you mostly have to rely on a router to make the best use of the internet plans. The solitary Gigabit LAN port justifies the same. However, if you look at the rear panel, you will notice that the slot for coaxial cable is present, as expected.

Note: If your setup requires two ports, consider getting the upgraded variant, i.e., CM1100. You can read my dedicated review of the Netgear CM1100. And if you wish to learn all the differences between the two variants, here’s a detailed comparison between CM1000 and CM1100 to make an informed decision.

As far as connectivity and relevant performances of the Netgear DOCSIS 3.1 cable modem are concerned, it allows you to feed in Gig-level speeds to the router of choice. If you only have one device to work with, you can establish wired connections and get up to 1Gbps speeds without breaking a sweat, provided the ISP permits.

Talking about ISPs, the Netgear CM1000 works swimmingly with Comcast Xfinity, Cox, Spectrum, Mediacom, Suddenlink, Sparklight, RCN, and WOW Internet. If you are into specifics, I would recommend pairing Gig plans from Cox and Spectrum with this modem, whereas for Xfinity, you can go as high as 800Mbps.

Driving the Netgear 1 Gig modem is a powerful multi-core chipset. And even though Netgear hasn’t declared other hardware-specifics, you can expect the power-efficient processor to work alongside 512MB of RAM. Moving further, this is one of the best-rated DOCSIS 3.1 modems with support for 2 x 2 OFDM/OFDMA channel bonding, making it future-proof and ready for multi-gig speeds.

However, the most promising aspect of this networking device is the DOCSIS 3.0 backhaul, with 32 x 8 channels to work with. And for gig-level connections, DOCSIS 3.0 is more than sufficient. Adding to this is the built-in QoS support that enhances the wireless capabilities of the router that you wish to pair with this modem.

As mentioned, the Netgear CM1000 is strictly a modem with a fast and self-explanatory interface. Also, it is compatible with most Wi-Fi 5 and Wi-Fi 6 routing devices, thereby allowing you to use virtually any routing device you own.

And when it comes to setting up the modem and activating the same, there isn’t a faster device around. Finally, it supports IPv6 protocol to make configuration quicker and the Quality of Service functionality more impactful.

The DOCSIS 3.1 powered Netgear CM1000 comes across as a holistic modem for most use-cases. However, if you want more succinct segregation of the hits and misses, read along:

Is the Netgear CM1000 a modem-router combo?

No, the Netgear CM1000 is a standalone modem that needs to work separately with a router to offer wireless capabilities. And a gigabit LAN port actually comes in handy if you want to pair the modem to the WAN port of the router.

What is the built-in QoS associated with CM1000 used for?

The associated Quality of Service allows the modem to prioritize traffic to the devices that want it the most. With QoS on offer, the modem powers the best quality of transmission to the router and lets the wireless device take it from there.

What are the max internet speeds supported by the CM1000?

The CM1000 can easily support max speeds of up to 1000Mbps, provided you have Cox or Spectrum as the preferred ISP. For Comcast Xfinity, however, you might only be able to churn out 800Mbps at max. I tried connecting it with a Gig-internet plan from Xfinity, which maxed out at 750Mbps.

The Netgear CM1000 might not seem like much, but it is a highly resourceful modem. Led by the best DOCSIS standard and a high-speed Ethernet port, the modem is minimally effective. And making things better is the affordable pricing that further justifies the faith most of us have in this modem.

Netgear CM1000 is a cable modem best-suited for Gig-level internet plans from the likes of Cox, Comcast, and more. It’s the perfect rival of the Motorola MB8600 and several other Gigabit modems. The modem features DOCSIS 3.1 technology with 32 x 8 channel bonding. The modem sports a single ethernet port that can be paired with a suitable router and used with Gig Internet plans from the compliant ISPs.