Modems are efficient networking allies. But then, a modem-router combo is something that a budget seeker would be more comfortable with. Especially for mid-range internet plans. While I can always recommend some high-end modems and combos for gig internet plans, the Motorola MG7550 is the perfect device for standard, non-Gig packages.

Modem-router combos are queer little devices that aren’t always the most scalable ones. This means, if you plan on upgrading the internet plan after a year or two, the modem or the routing segment of the combo can act as a bottleneck. You cannot replace either without getting rid of the device itself.

But things are different with the Motorola MG7550 as this device perfectly balances the capabilities and becomes a perfect pick for mid-range internet plans. In simple terms, it underpromises and over-delivers.

Also, if you are into specifics, the Motorola MG7550 is compatible with the most well-known ISPs and doesn’t go all out with the specs sheet but keeps user safety as a priority by offering protection against DoS attacks. Enough speculations and scratching the surface! Let us dig right into the details by getting to know this modem-router combo a lot better, across diverse parameters. 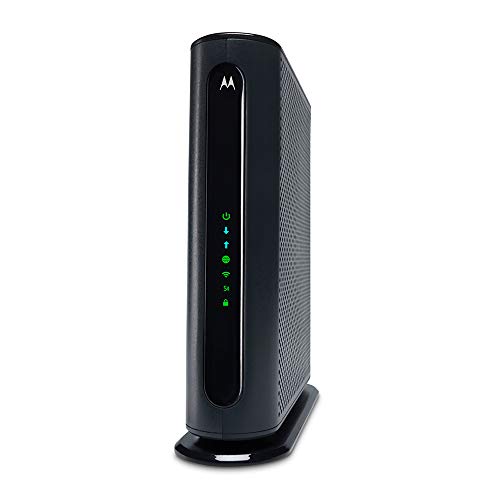 I have always been game for modem-router combos as they are the most productive networking devices around. My liking made me persist with the Motorola MG7550 as the primary device and I shall now review each aspect at length, based on my findings of the same.

And just so you know, I tested it with Cox’s mid-range internet plan and experienced decent speeds, wireless coverage, and consistent throughput.

When it comes to design and aesthetics, the MG7550 boasts a vertical and well-ventilated layout. Currently retailing in black, the modem-router combo measures 2.6 x 8.6 x 9.1 inches, which is significant enough considering the slew of sleek devices around.

And in terms of weight, this device weighs close to 1.5 pounds, making it easy enough to carry around, in case you plan on shifting, elsewhere.

Adding to the aesthetic traits is the seven-LED setup that accurately projects the network status. And just for additional insights, you would want at least five LEDs to be signaling green for assuming the internet connection to be in healthy stead.

Coming to the port setup, this modem houses four Ethernet ports, allowing you to establish high-speed wired connections with smart devices. And the speeds are good enough to make you persist even with Gig internet connections.

And on top of that, the routing segment of this device boasts a 3 x 3 channel spread, with three internal antennas ensuring excellent throughput and maximum coverage. As an 802.11ac router, the MG7550 offers dual-band access and allows you to reach maximum 2.4GHz speeds of almost 120Mbps and 5GHz speeds of up to 450Mbps, for a 500Mbps internet plan.

As far as ISP compatibility is concerned, the Motorola MG7550 is one of the most compatible modems for Midco, Charter Spectrum, Xfinity Comcast, Time Warner, and more. And trust me, you would be better served to invest in this combo for less than 200 dollars instead of relying on the typical ISP rentals.

At the core is a powerful Broadcom chipset that ensures congestion-free packet transmission. However, the processor ensures that the modem and router-specific segments work rather perfectly with DOCSIS 3.0 as the existing networking standard.

And instead of being overkill in terms of speeds and channels, MG7550 makes way for 16 x 4 channels, allowing you to reach reliable downstream and upstream speeds. Coming to the underlying tech, there is a full-band tuner in place for energy-efficient transmissions.

The routing segment of this combo also makes room for Power Boost technology for better speeds and range. And the best thing about the built-in router is its ability to miraculously reduce congestion while transmitting.

The MG7550 covers close to 2000 sqft and even allows you to reach max download speeds of up to 600Mbps. However, I would recommend using the same with a 500Mbps plan to maximize potential. But that’s not it. This combo supports shared internet access, an advanced firewall for better security, and integrated parental capabilities for managing the network attributes better.

Which internet plan is best suited to work with the Motorola MG7550?

While you can pair any plan with the same, you can be most productive with a 500Mbps plan in place. However, if you insist on a Gig plan, try and ensure wired connectivity as then, you can reach max speeds of up to 980Mbps.

Is the Motorola MG7550 secure enough?

Yes, MG7550 comes with advanced security specs to keep users far off from Denial of Service and other online attacks. Plus, there is a standard configuration manager in place and also top-notch parental control support.

Yes, the Motorola MG7550 comes equipped with AnyBeam beamforming support that allows you to maximize range and performance, regardless of the network band you are on.

Motorola MG7550 is a budget-friendly modem-router combo with mediocre specifications. I tested it for over two weeks, and I feel I’m qualified to share my experience and opinions on it. Unlike most stand-alone cable modems, the MG7550 features only 16 downstream and 8 upstream channels. However, for the price it retails, I can’t really complain about that.

The modem-router combo is great when functionality and signal quality is concerned. As for the built-in modem, it is backed by DOCSIS 3.0 technology, 256MB RAM, and 128MB of storage. Paired with a Broadcom chipset, the combo device works as intended. I could get decent speeds on the Charter Spectrum plan. This Motorola combo device is suitable for up to 500 Mbps connections.

With four Ethernet ports, you’re sorted with wired connectivity. The built-in router has a speed capacity of up to 1900 Mbps and runs on Wi-Fi AC standards. It handles multiple devices and spreads the coverage over 2000 Sq Ft areas. I always appreciate the inclusion of LED indicators on networking devices, and Motorola continues its legacy. The device is also suitable when security measures are concerned. It supports firewall and parental controls, which are helpful to protect your home network.