You are here: Home / Comparisons / Arris SB6190 vs Arris SB8200: The Detailed Comparison

If you are planning to purchase a new modem for your home or office, it is recommended to select between the Arris SB6190 and the Arris SB8200. Both these modems differ significantly when features are concerned, and end up catering to divergent clientele. The following comparison would help you understand each product better and make informed modem buying decisions. 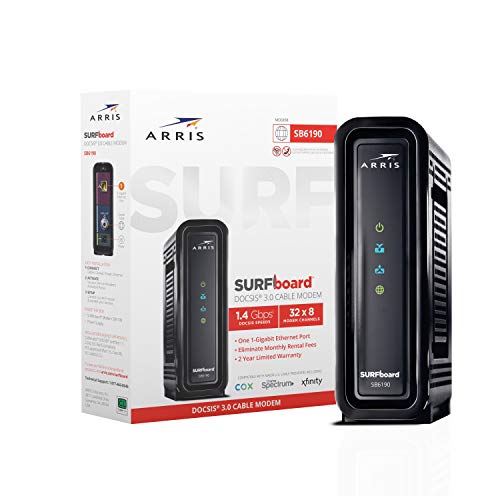 The key differences between Arris SB6190 and Arris SB8200

DOCSIS Tech: Arris SB8200 is a DOCSIS 3.1 modem, unlike the SB6190 that adheres itself to the DOCSIS 3.0 platform. This is the reason why the SB8200 can be deemed as a future-proof device, provided you want to make use of thicker transmission channels, energy consumption, and faster data speeds.

Channel Bonding: As both these products are DOCSIS 3.0 compatible, you get 32×8 channels, for downstream and upstream access, respectively. However, the Arris SB8200 brings in the additional 2×2 OFDM/OFDMA support as a part of the DOCSIS 3.1 technology to minimize congestion, reduce latency, and improve multiple user access.

Ethernet Ports: Coming to the ports and the wired throughput that follows, the Arris SB8200 features two GigE ports as opposed to the solitary one exhibited by the Arris SB6190.

Link Aggregation: Arris SB8200 comes with two Ethernet ports and even supports link aggregation. This allows you to increase the wired throughput for 4K streaming and gaming, provided two IPs are assigned. No link aggregation is supported by the Arris SB6190.

Chipset: While the SB8200 features a standard Broadcom chipset, SB6190 keeps persisting with the Intel Puma SoC, known for its significant latency.

Speeds: The SB8200 promises data transmission speeds of up to 2000Mbps. On the other hand, the SB6190 is good enough for basic gig plans as I could churn out close to 960Mbps on a high-bandwidth Xfinity plan.

Price: If you seek an affordable modem, the SB6190 seems like a better bet, owing to the sub $90 price point. The SB8200 is priced almost double at close to 160 dollars.

Similarities between Arris SB6190 and SB8200

Now that I have enlisted the differences and similarities between these two reliable modems, it is time to observe some of the more decisive attributes, closely enough. Firstly, it is the design that has my attention as both these modems feature white-colored, plastic-clad chassis with decent heat dissipating vents to go with the aesthetics.

As far as the port setup is concerned, the SB6190 makes peace with one GigE slot. The SB8200 from Arris comes equipped with two similar ports, thereby making it a better choice for 4K streaming and establishing direct connections with other bandwidth-hungry devices.

When it comes to speed and performance, the Arris SB6190 fares as a standard DOCSIS 3.0 modem, boasting top speed limits of 1400Mbps! This includes wired and wireless throughput. I even connected it with my PC to experience consistent download and upload speeds of 950Mbps and 23Mbps, respectively.

The SB8200, on the other hand, is way faster and promises maximum speeds of up to 2Gbps. But the existence of two ports and the ability to work with multi-gig connections in the future makes the SB8200 a better bet for establishing multi-device connections.

As far as the ISP compatibility is concerned, both the cable modems are in sync with the leading cable service providers. However, the SB8200 fares slightly better in this regard by being more at ease with service providers like Charter and Brighthouse alongside the usual Spectrum, Cox, Comcast, and more.

Consider the Arris SB6190 if you are looking for:

Spending some more money on the SB8200 makes sense if you are interested in:

As mentioned throughout the course of this discussion, both these modems i.e. Arris SB6190 and Arris SB8200 are reliable networking assets. However, the clientele, preferences, and usability are for you to decide as I have already compared and contrasted these two devices with ISP compatibility, port management, processing setup, pricing, data rates, and more being the appraised parameters.

Upon detailed evaluation, I felt that the SB6190 is more of a mid-range modem that heats up a fair bit at times. Also, if you plan on using a modem for your future-proof networking needs, the SB8200 seems like a better bet as it is more balanced with two Ethernet ports, better speeds, DOCSIS 3.1 support, and 5 status-indicating LEDs.

Irrespective of the device you choose, both the evaluated modems completely justify the price point and the cost-to-ownership ratio. However, if you were to choose one, opt for the Arris SB8200.